At the Foot of the Stone is the first of what promises to be a bi-monthly series of screenings of short art films and visual arts pieces presented by Lux Scotland at Eden Court in Inverness. (Lux Scotland is a visual arts agency focusing on the archiving, development and support of visual and moving image art in Scotland. They’re currently attempting to engage with the subject outside of the usual centres in the Central Belt.) Forthcoming screenings will have different curators and – while I enjoyed Lux Scotland director Nicole Yip’s talk about their work and the selections she’d made – I’m looking forward to seeing how different a perspective we get from screenings curated by artists and curators living and working in the Highlands.

Almost all the films in this collection seemed caught between styles and genres, and more importantly from my perspective, between being purely abstract or being tied to a narrative. (For me, Midgie Noise from Video Artefacts worked best – it was the shortest and the film I could most have wished for a longer running time – because it was a purely abstract work, not trying to be anything else. It could therefore be enjoyed for what it was aesthetically, a brief but beautiful and mesmerising moment.) With the longer films – BRIDGIT and to a lesser extent April whose last gorgeous couple of minutes caused me to forgive instantly any confusion I’d suffered before – it took a while to establish whether, and how, the images and the voiceover related to each other. Did they exist in harmony with or in contradiction to, each other? Was the relationship purely abstract or was there some deeper symbolic or metaphorical meaning that I was missing. Patterns and rhythms certainly emerged but mostly they worked better when I stopped trying to assign meaning and narrative and just let them flow over me.

Other than April and Plum the films didn’t seem to resolve at the end. There was no narrative conclusion, leaving me somewhat bereft, struggling to assign meaning and message to the works. Was that the intent? Is that fundamentally the point of the art film, to leave you to draw your own conclusions rather than lead you to any one answer or message? I found this particularly frustrating with Sorry not Sorry as the film which seemed to have the most interesting things to say of the collection, but left me feeling that it had an insight that was just about to emerge, but the film ended before it could break the surface.

The films themselves are bound together by the thread of the artists all having been awarded The Margaret Tait Award – and it is perhaps her role as a writer and poet, rather than her pioneering film-work that best sheds light on all of these films. Her concept of visual art as essentially a visual, moving-image poem is particularly helpful – to me at least – in understanding these films. They owe much less to short stories, and the narrative quirks and charms of those, and rather more to poetry. They are experiments in form and expression, and while there may well be an overarching narrative, that’s not necessarily the point of the exercise. Instead they explore and manipulate their own central ideas, turning them around to look at them from different perspectives, tearing apart or playing with them, as the artist sees fit.

The Festival of Architecture made its appearance in Inverness last weekend. The Building Blocks/Scotstyle exhibition(s) at the Inverness Museum and Art Gallery is a rather unusual marriage of tow thematically similar but vastly differently executed exhibitions. While they are both part of the same festival they are both very different responses to idea of public engagement with architecture. Scotstyle is the more ‘traditional’ part of the exhibition, a travelling display courtesy of the RIAS (the Royal Incorporation of Architects in Scotland) celebrating the 100 best pieces of Scottish architecture from the century since the RIAS was founded – ten from each decade to give a nice spread to the choices. The buildings of choice were nominated by members of the public – before being narrowed down by a panel of experts – and it shows in some of the more esoteric choices on the list – some of the loveliest factories I’ve ever laid eyes on made the grade.

(Although arguably, I’d have more faith in the selection process if not for the picture used to illustrate the University of Stirling. It’s not that I disagree with their assessment that the Pathfoot building is an architecturally interesting building or that it is head and shoulders a better-designed and more pleasant building to study in than its companion across the loch Cottrell. But that the picture used is not of Pathfoot – its of the halls of residences and look, I lived in them as a student and much as I enjoyed that time and appreciate how much money the university has poured into refurbishing them in the decade since I graduated, but the buildings themselves are ugly, uninspiring buildings undeserving of any kind of complimentary architecture prizes.)

The other half of the exhibition couldn’t be more different if it tried. Interactivity and engaging children with architecture through technology are its watchword. Mostly it uses Minecraft as its gateway encouraging young visitors to explore virtual reality versions of local architecture and then build their own which can then be displayed in the gallery as part of the exhibition. As much as their part of the exhibition was aimed at – and clearly being thoroughly enjoyed by the much younger visitors, numerous grown up visitors including myself had fun with the best use of QR codes I’ve seen yet. Combining the simple – table tennis bats with QR codes printed on one side – and the complex – Ipads with software that translated the codes into 3D animated versions of local landmarks. 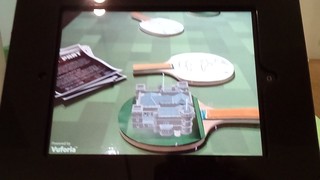 All in all, I’m not sure that the whole exhibition hung together as well as it could have – the two parts were just a bit too disparate – but it was fun and experimental, something a bit different and quirky, and I look forward to future exhibits that develop that experimentation further.

I can’t help but feel that doing nablopomo this year has been like making a condensed version of my blog. So, really I need to write a gig review and a 2000 word academic film review before the end of the month and I’m golden! Maybe, not, but I did go to a gig on Wednesday night so it only feels right to review it.

I’ve had several conversations lately about feeling like a grown up or just plain feeling your age. I think I’ve found the definitive moment for me. The last time I saw Idlewild I was about 14 (I was a T in the Park with my dad and we caught the tail end of their set) and at their gig on Wednesday night I spotted a young boy, maybe 12 or 13 also at the gig with his dad, and thought he’s about the age I was when I first saw them…and realised that that meant he’s been on the planet for less time than its been since I last saw the band live. Yeah. Otherwise the audience was mostly my age and older which probably tells you both when they were at their peak of success and how long its been since they last released an album. The crowd were enthusiastic but a little restrained – the bouncing was gentler than I expected.

There is something decidedly unnerving about turning up for an indie-rock gig only for the ‘support’ act to be seriously folky and mellow. I did have some serious cognitive dissonance as I recognised first that the song they were playing was These Wooden Ideas and then that the lead singer looked awfully like Roddy Woomble… I did a fair bit of mental scrambling from remembering that one of the guys in the band had a rather folky side project (I was sure, and have since confirmed that it was Rod Jones I was thinking about) and wondering if they were supporting Idlewild on tour, to being increasingly sure that this was in fact Idlewild, just not as I knew them. It was good, just not very…Idlewild-y? I knew they’d seriously mellowed out over the years, I hadn’t realised it was by this much. However, several songs into the set they thanked everyone for turning up early for their acoustic set and all became clear, so I was able to relax and enjoy the strangeness in time for them to do In Remote Part/Scottish Fiction which holds a special place in my heart in general but felt particularly apt in these troubled times. And the guitarist did a fine job of simulating crunchy guitars on an acoustic instrument!

I was a bit uncertain of how it was going to be until they kicked into Roseability and the crowd started singing the refrain back at them. (After all these years, I’m still not entirely certain what exactly Gertrude Stein said was enough…) The band have mellowed out quite a bit since their early ‘a flight of stairs falling down a flight of stairs’ day – they will always be the band that got live gigs banned in my old student union for the best part of four years, even if everyone I know who was actually in attendance is a bit baffled as to why that gig prompted the ban – but that’s not necessarily a bad thing. Watching them live, you can still see the shadows of the band they used to be – there were moments, especially during When I Argue I See Shapes and You Held The World in Your Arms when the instrumentals got louder and punkier than expected, when the feedback loop of older songs and audience familiarity with and enjoyment of those songs threatened to pull them back in time. I like the newer mellower stuff, just as much as the older punkier stuff, and listening to Roddy sing I suspect that at least some of that change is that the punkier stuff was probably shredding his voice a bit. (There’s a man who knows how far he can push his voice and sings to that point and no further.) Honestly I’ll take a mellower incarnation of the band, if the trade off is his voice surviving for another ten years of albums and gigs.

I always forget how many excellent tunes they have, and it was a rare treat to be at a gig and think they’d played all the songs I was hoping they’d play only for them to crash into another brilliant and well-loved tune. I might wish I’d managed to see them as a student (c. In Remote Part) but I can’t regret in the slightest having gone to see them, even on a Wednesday night, in packed venue, with a crowd of people having just as much fun and having just as few regrets about how tired we’ll all be at work in the morning.