Another chunk of the festival of architecture has arrived in Inverness, this time in the form of the Mini City/Land of the Giants exhibition. I stumbled over it by accident at Eden Court the other day, they often have exhibitions tucked away upstairs and I spotted it by chance glancing down into another half-hidden gallery from half-way up the stairs. (One of my favourite things about Eden Court is all the fabulous little nooks and crannies that it has, it’s great fun to go for an exploratory wander and find somewhere to curl up with a book and a cup of tea, but its also really easy to miss something really interesting for approximately the same reasons.) Tucked away in the gallery next to the Bishops House part of Eden Court is a fascinating little exhibition. 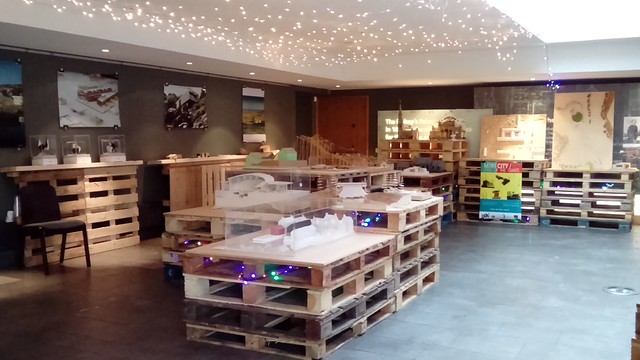 The exhibition itself features scale models of buildings, campuses, sites and homes, both built and un-built, most of them local but all of them created by local architects and model makers. (For the purpose of this exhibition ‘local’ means ‘North of Scotland’ which appears to cover, the Highlands, Islands – Hebridean, Northern & Western – Moray, Aberdeenshire – in fact quite far south given the inclusion of Perth Concert Hall.) They were mostly created in the process of designing the buildings and some of those that have made it into full-sized three dimensional space, are accompanied by photos of the finished buildings in situ which adds a pleasing symmetry to the process. 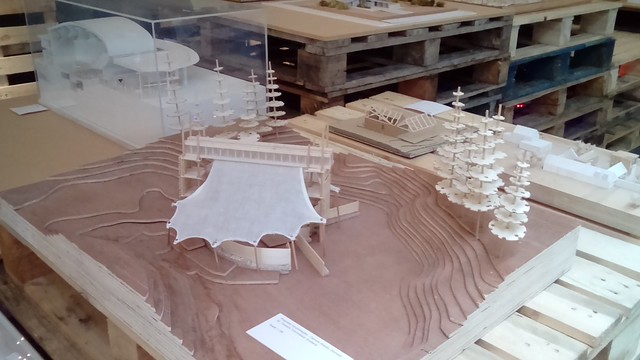 They’re almost all mounted on piles of wooden pallets, which you’d think would look really messy, but actually really enhances the feeling of constructed reality and impermanence of the models themselves. The models – with a few notable exceptions – were created as part of a design process, to demonstrate a design in 3D space, to show a more realistic view of how its features will interact with the wider landscape. Mostly, they were never meant to be seen by more than a handful of people – in some cases, just a few architects and the client. There’s something secret and special about seeing these artefacts, ghosts of buildings as they might have been or might yet be. It feels like a peak behind the curtain of the architectural design process, a drawing back of the veil that enhances rather than undermines the magic.